In a breach of KT tradition we publish a FB post. However, with good reason. This is a reaction on the text written by Andrew Korybko for Katehon – generally a publication piling semi-idiotic political analysis together with some really quality stuff, which is a hallmark of the strategy of chaos so dear to it’s main luminary Alexander Dugin. The post was written by Matija Lukač, probably the most well informed – in the terms of on the ground knowledge – Croatian author about situation in Syria, who previously warned us about the fact that Korybko is either a charlatan or downright warmonger. This post is not concerned with Syria, but with Korybko’s article on Croatia (“Croatia Moves Forces to the Serbian Border“) from Katehon. We added some insults to Matija’s injury of this individual’s ignorant, but well packaged, warmongering piece. You will find KT comments typed in red. On the last note, this is not the only – and by far not the least stupid – attempt to warmonger on Katehon, but as Korybko is at least literate, which could not be said about some of other authors on that site, he deserves to be addressed. Some of the others are on the level of elementary school knowledge of geography and relations in international politics.

I have to react to fabrications by certain „political analyst“. If there is something I hate so deeply it is this: a lie. And I will not turn the blind eye on someone who employs lies on huge scale regarding the region where I live.

So this is how propaganda works for person in question, i.e.: Andrew Korybko:

Yes, Croatia as a NATO member will participate in NATO missions in Eastern Europe and the Baltic States. And so will the country from which Andrew Korybko came from, the United States. To say that it was reported that the Croatian Army has deployed its troops to Vukovar, a small town located on the border with Serbia, is a blatant lie and serves only to his warmongering purpose.

When the Saints go marching in: Liberation (sic!) of Croatian city of Vukovar by Serbian army in 1991. If you have a Serbian acquaintance, ask him to translate the lyrics of their song.

In case you can’t discern their flag (at the time frequently waved and occasionally kissed by now Prime Minister and President of Serbia): 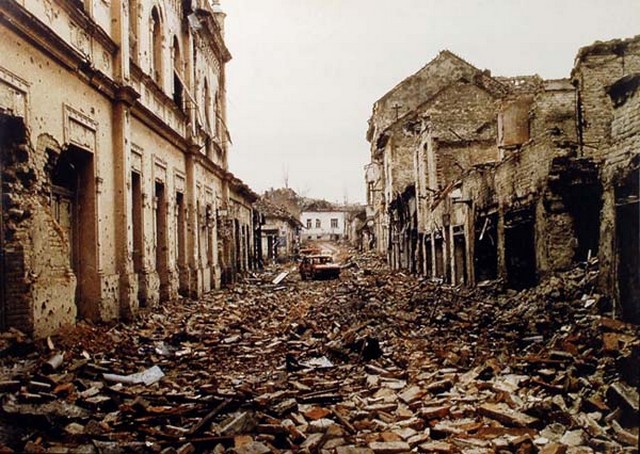 Fruits of Liberation by artillery fire re-decoration: Vukovar incorporated in Heavenly Serbia. Not a dime was ever paid for re-re-decoration, thanks to efforts of International community, supposedly “demonizing” Serbia.

We already have our troops in that region for 25 years, but if we are to believe his words one could presuppose that Croatia is massing its troops to invade Serbia. The scenario which American warmonger would love to see.

Let us continue with some more pearls of Korybko’s wisdom:

Croatian (ex) Prime Minister is in fact both Croatian and Canadian citizen, but the President has only Croatian citizenship. Croatia is not a state? Although I said plenty of times that Croatia is a puppet state of Korybko’s home country, to say it’s a colony is utter BS because American citizens cannot enter Croatia without visa.

Another blatant lie is that US military strategists hold the Croatian army on alert for possible conflicts in the region. On alert? Since I know many active Croatian Army’s servicemen, and I myself was a soldier in the Croatian Army, the idea that there’s state of alert in army can only indicate that Korybko never met anyone who served in the army to explain to him the basics; as a segment of “serious” geopolitical analysis it’s just beyond comprehension. Nothing but the pure fabrication of an American warmonger, not unlike those currently warmongering with an eye on the Middle East, who knows nothing about how military system works.

And for the part of possible conflicts in the region, this exists only in his brain – delusional or calculated, that remains to be seen – as well as in the heads of Far-Right movements who might want to see the new war, yet not really as eagerly as an American warmonger Korybko.

We’ve seen enough of wars in this region, and we are sick of it – all of us. But that’s something that one warmonger can’t – and indeed should not – understand if he is to do his dirty job properly.

„The Croats, who received statehood in violation of all international rules and regulations continue to dutifully fulfill all the instructions and advice of their overseas owners.“

Crimea perhaps? Constitution of Yugoslavia didn’t allow any of six Republics to go rouge, but what was under the International Law and according to UN Charter is the same what Crimea called upon as the Republic which was in the federation with Ukraine. On popular referendum in 1991, 83,5% of electorate voted out of which 93,2% voted for independence of Croatia.

And at that time we didn’t really care about international community who in fact refused to recognize us. So, for Crimea is OK to vote in popular referendum to leave Ukraine, but for Croatia was not?

For those who don’t know, Croatian Army has around 50,000 personnel, out of which active combat personnel numbers about 14,000. Maybe, just maybe we can get 10,000 soldiers to be ready to fight immediately, but no more than that.

Huge military power of Croatia will soon invade Serbia. Or is it just an illusion of one warmongering liar? And what do you think if he’s making such lies about Croatia, how legit and truthful is he regarding any subject whatsoever, like Syria for instance?